Ramassage en bordure de rue MARDI-SAMEDI 11 h - 17 h. Livraison gratuite pour les commandes de 50 $ et plus au Canada !
If you don't already have plans for this Friday, this vernissage might just be it. There's a new group exhibition opening at La Petite Mort Gallery called GAZE that will definitely be a good time. Everybody's favorite local DJ (or mine, atleast) Lamb-Rabbit will be supplying tunes and live stick + poke tattoing by Anna Taylor and Nicolas Lapointe will be taking place. This ain't your grandma's art show that's certain! 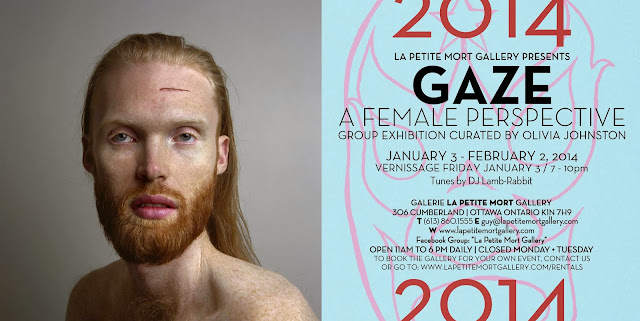 GAZE is curated by Ottawa's very own Olivia Johnston, an uber talented photo based artist who has shown at said gallery as well as Nuit Blanche and Festival X. Working primarily with the medium of film, she does stunning (and I mean stunning) portrait photography. That's her photograph on the flyer to give you an idea. GAZE marks her curatorial debut and it's going to be super rad! Here's an excerpt of her statement:
The role of the female in society is complex and confused. Slung between assigned selves, she is often not able to take ownership of her life, her body, or her psyche. The navigation of identity throughout girlhood and into womanhood is a difficult process, affected a great deal by the confused role that society expects her to fill. Indeed, with the arrival of the digital era and widespread use of the Internet, concepts of beauty, sexuality, and femininity seem to be more convoluted than ever for their primarily female audience.

This exhibiton features the work of 12 female artists under the age of 30. Most of them are Ottawa locals! Danica Olders, the designer behind the ever so popular line of tees we carry called The Lost City is one of them. Magida El-Kassis also has a piece in the group show. She's the wonderful photographer behind the amazing new photos on our webstore. I'm also in this show and beyond excited!!

So much girl power you don't want to miss out on! The vernissage is this Friday from 7-10 pm. If you can't make it, fear not - it's a month long exhibit that will be up at La Petite Mort until February 2nd. If you can, see you there!